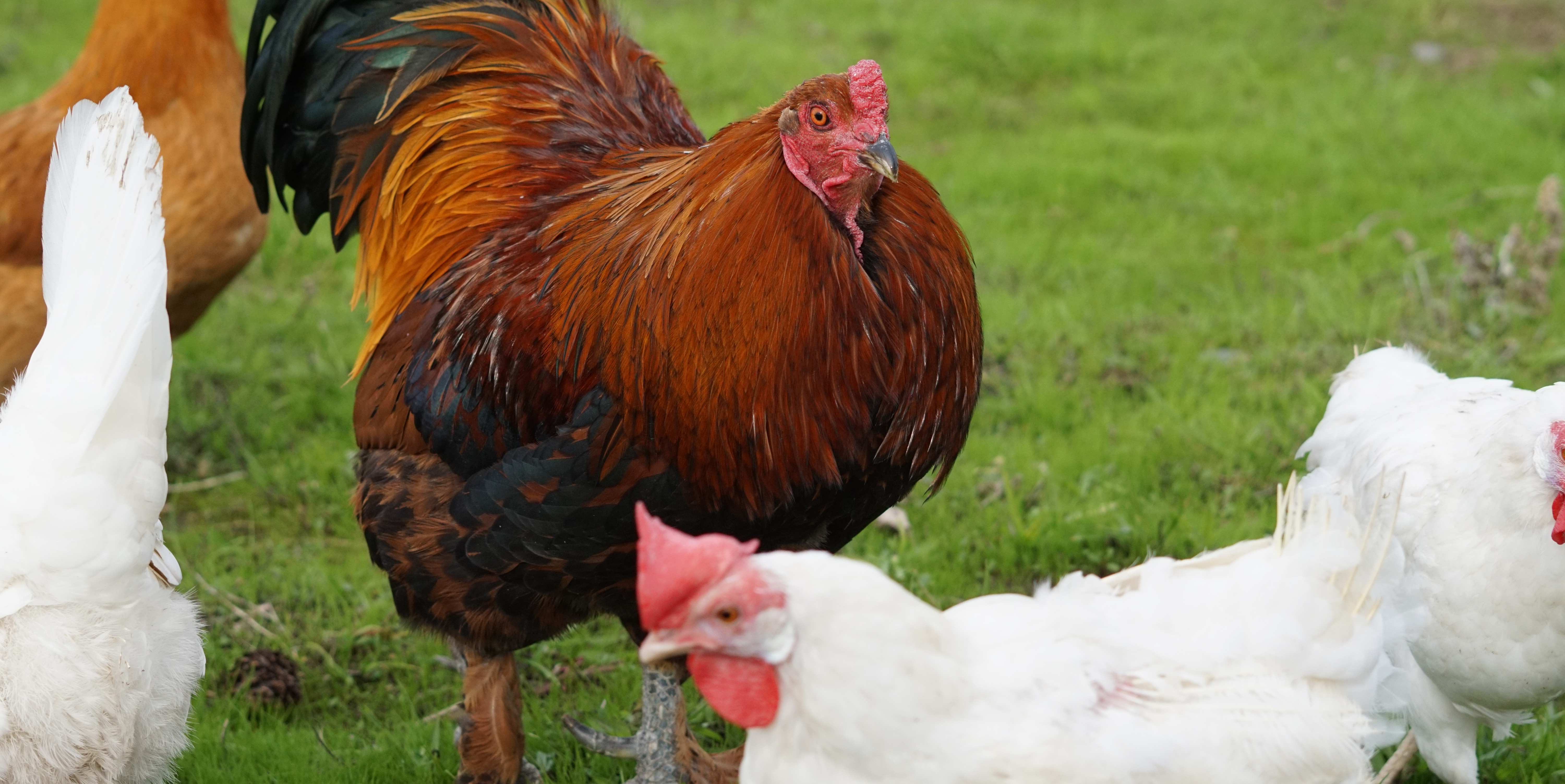 Charlie's Acres is home to over 30 hens and roosters, who were previously destined for the dinner plate.


In the U.S., there are no federal laws protecting chickens from abuse and approximately 9 billion chickens are killed for their flesh each year. Chickens raised for meat are selectively bred to grow so quickly that their legs and organs can’t keep up, often leading to heart attacks, organ failure, and leg deformities. These chickens are sent to slaughter at only 6 to 7 weeks old.

In the United States, more than 300 million hens are used for their eggs every year. Hens used in the egg industry often spend their entire lives crammed tightly together inside wire cages. Even chickens raised on “cage free” farms, rarely have significantly more room, and “certified humane” still allows for farmers to cut off a part of their sensitive beaks, so the hens don’t peck each other out of frustration. Between selective breeding, artificial lighting, and drugs, hens lay unnaturally high numbers of eggs so that their bodies quickly become depleted. When their egg production drops, these hens are sent to slaughter. Male chicks in the egg industry are killed immediately.

Roosters are the animals we receive the most requests to take in. With the growing popularity of backyard hens, the public continues to breed and buy baby chicks, half of whom will mature into roosters. Because sexing chicks is an inexact science, one in ten chicks sold as female will mature into a rooster. Roosters are often unwanted or banned within city limits due to their signature loud crow, and protectiveness over their flock. Sadly, only one in every 500 roosters who enters a shelter, finds a home. This is an under-recognized yet exponentially growing area of concern in animal rescue.

Brewster began life as a chick in a classroom hatch project and went to live with a family when the project was over. When Brewster grew up, his family was disappointed to discover that he was a rooster, rather than a hen and became so frustrated with his loud crowing that someone in his family through a piece of wood at him and severely broke his leg. Brewster was rescued by a neighbor who had him go through a series of surgeries, and after his leg healed, he came to live at Charlie’s Acres. He takes his job seriously and is VERY protective of his hens, but that is not to say that he is mean. He is very kind and generous with his group of hens and always lets them know when he finds a really good treat and lets them eat first.

Davey & Mulligan are two extremely lucky roosters. Raised on a commercial farm for meat, they were packed tightly on a transport truck headed to slaughter when they were only six weeks old. This truck crashed on the highway in Southern California, killing or letting loose hundreds of chickens. Davey and Mulligan were on the side of the road when they were rescued by a passerby. Their story is extraordinary but not uncommon. In 2018 nearly 100 transport truck accidents involving animals were in the media in the U.S. alone. Davey & Mulligan now live in a “bachelor group” with three other roosters and a flock of sheep. They spent their days foraging in their huge pasture and dustbathing. 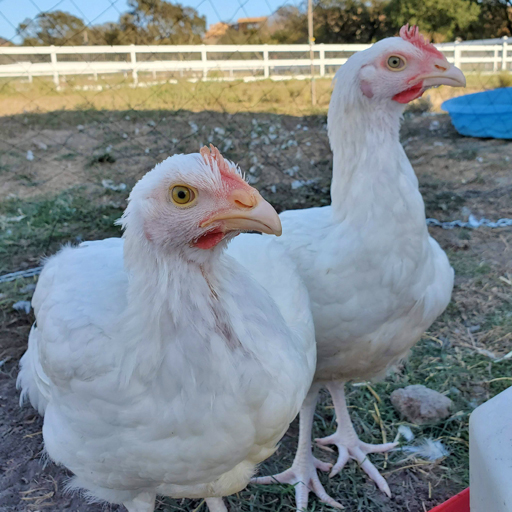 Bonnie & Marie came to Charlie's Acres all the way from Brooklyn, NY and were intended to be a part of the Kaporos Festival, an Ultra-Orthodox Jewish ceremony which involves swinging a chicken in the air and ritual slaughter. Before the ritual, the chickens are crammed into small crates and may go without food and water for days. There is a kinder way. Many Orthodox Jews forgo the chicken-swinging in favor of waving money instead, and then donating that money to charity. Despite their terrifying beginning, Bonnie & Marie are very friendly towards humans. Marie in particular was in such poor shape when she arrived, that she spent several weeks living in the house with our care staff, where she spent her time snuggling on the couch and hanging out in the kitchen while the humans cooked dinner, asking for some veggie scraps. 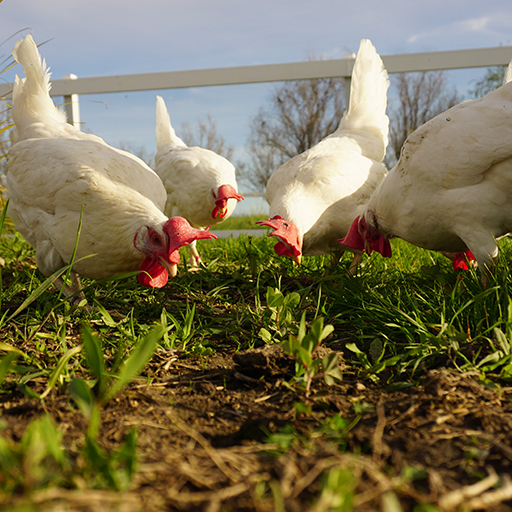 These leghorn hens; Cara, Ellen, Florence, Hillary, Jesse, Laverne, Sara, Valerie, and Cordelia; came from a highly concentrated factory farm and were kept crammed together in filthy battery cages. Leghorns are perhaps the most intensely bred for high egg production. They lay about 300 eggs per year each. This is very difficult on their bodies and battery cage hens are typically considered “spent” between 12 and 18 months. Due to the loss of calcium and nutrition that comes with egg production, these hens can suffer from osteoporosis and broken bones. When they arrived, their feathers were ragged, and they were thin and in poor condition. With plenty of extra high protein treats, these hens gained weight and their feather quality improved. They now spend their days foraging in the grass under the watchful eye of Brewster the rooster.


- Chickens form friendships and social hierarchies, recognize one another, develop a pecking order, and can remember the faces and ranks of more than 100 other birds!

- Chickens have a cultural knowledge that they pass down from generation to generation, which helps them avoid harmful foods.

- Chickens have dozens of different vocalizations to communicate. There are different sounds for danger approaching from land, sky, and water and mother hens begin teaching these to her chicks before they even hatch. Mother hens cluck softly to their chicks before they hatch and they chirp back to her and to each other from inside their shells.

- It’s a rooster’s job to protect his flock from potential danger. At Charlie’s Acres, Brewster calls all of the hens inside if he spots a hawk overhead. He will also taste test new foods for them to make sure that it is safe to eat. Once Brewster determines that the food is safe, he guards his family while they eat without fear.


A flock of chickens can be a wonderful addition to your life. Chickens are intelligent and curious, and each has a distinct personality. They’ll keep your garden free of pests (and well fertilized) and bring a smile to your face every day!


Find fun chicken-themed activities, as well as educational and compassionate lesson plans for kids and teachers on our kids page!