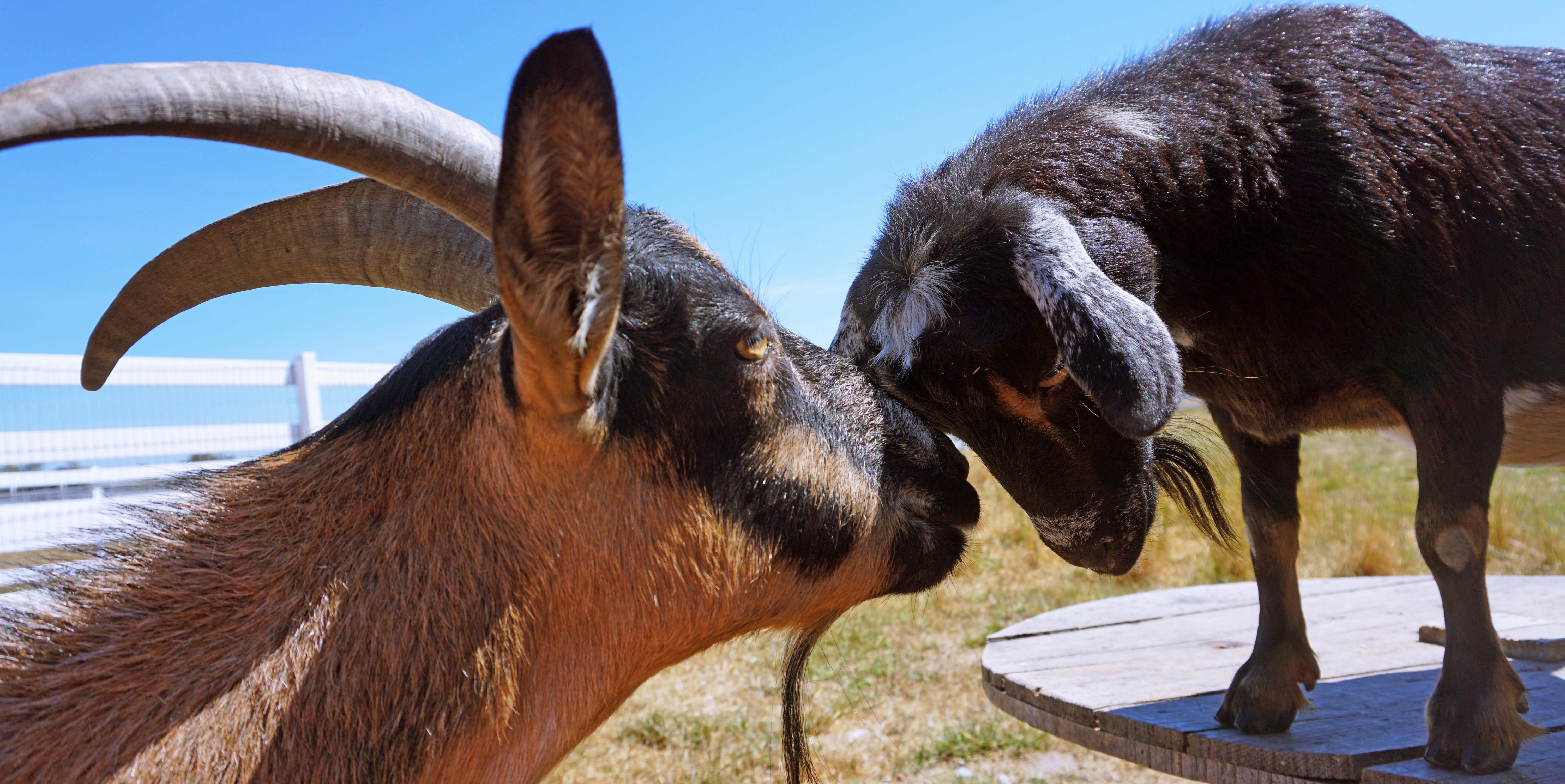 Charlie's Acres is home to 21 goats, rescued from a variety of situations.


According to federal records nearly 1 million goats were killed for their meat last year in the U.S. alone, though experts believe that this number only represents 50-60% of actual goat slaughter. Because goats are commonly killed by “backyard butchers” or in ritual religious facilities, many goats killed for meat are unaccounted for. Though they can naturally live 12-14 years, goats used for meat are killed between 12 and 20 weeks old, sometimes even as young as 1 week old.

In addition to being raised for meat, goats are often used for milk production. Some consumers have switched to drinking goats’ milk because they are allergic to cow’s milk. According to allergy expert, Dr. Scott Sicherer, “More than 90% of the time, people allergic to cow's milk are allergic to goat's milk.” Others choose goat’s milk under the belief that it is more humane than cow’s milk. In fact, every animal welfare problem that exists in the cow milk industry also exists in the goat milk industry. Like all mammals, goats must be pregnant or have recently given birth in order to produce milk. Babies are taken from their mothers so that her milk can be sold. When mothers are no longer producing enough milk to be profitable, she is sent to be slaughtered.

Goats are naturally playful and curious animals. They love to explore, forage, climb, and frolic. They can be very affectionate towards their fellow goats as well as humans. Our goat residents at Charlie’s Acres are frequent favorites among visitors due to their friendly personalities and inquisitive nature. 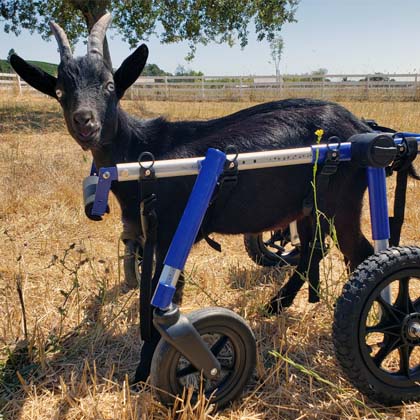 Johnny was a special little goat who required a lot of extra care and touched many hearts. Johnny was born with a neurological condition which made it difficult for him to balance on his own. Our incredible team of staff and volunteers used a custom wheelchair to help Johnny walk and did regular physical therapy with him. This little goat insspired us all with his spunky personality and not letting any setback get him down. In August 2020, Johnny passed away in his sleep. He lives on in our hearts and memories. 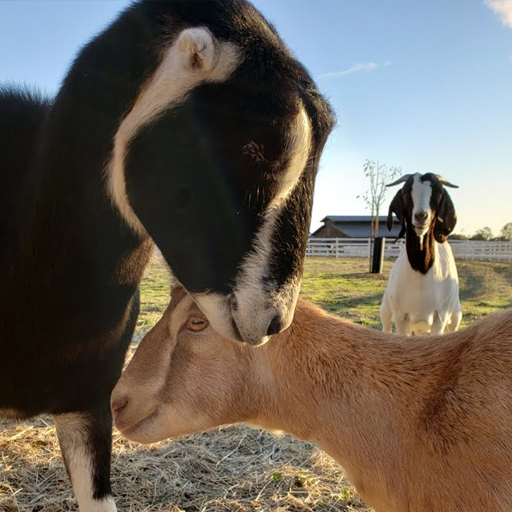 Ginger was brought to Charlie’s Acres by a young activist who negotiated with her former owner to relinquish her. She arrived at Charlie’s Acres in extremely poor health due to severe neglect; emaciated, full of parasites, and suffering from a life-threatening udder infection. Ginger arrived accompanied by her adopted daughter, Mary Ann, who had been rejected by her own mother and whose development was stunted due to nutritional deficiencies. We feared for Ginger’s survival during those first weeks and were thrilled as we saw her put on weight and gain strength. Ginger runs to greet us and takes all her medical treatments in stride, amazing us with her friendliness and positive attitude, despite her terrible start in life. This inseparable pair spends their days in the grass and sunshine as they continue to grow stronger.

Frederick and Carol are a mother son duo that are very closely bonded. Carol was purchased by an individual for taco meat, but this person was surprised to discover that Carol was pregnant. When Frederick was born, he was not able to latch properly to nurse. Fortunately for him, a neighbor was a lactation specialist and agreed to taken them in. She was able to help Frederick latch but after spending time with them, did not want to see them end up on a dinner plate, so she sent them to Charlie’s Acres.

Dulce & Genevieve are mother and daughter pair and were originally purchased as 4-H projects for two teenage sisters. By the time the project was over, these teenage girls had fallen in love with Dulce & Genevieve and did not want to sell them at auction for slaughter. Instead, they kept their goats, went vegan, and rescued Chloe soon after. Because of their love for these goats, the two sisters began rescuing and rehoming goats in dire situations, including many who had special needs and required surgery. Charlie’s Acres residents Ginger & Mary Ann were also rescued by this amazing team and so when it came time for these girls to go off to college, we were happy to give Chloe, Dulce, & Genevieve a home where they would receive plenty of love and attention.


- Goats have long, horizontal pupils, which allows their line of vision to stay level with the horizon so that when their heads are down to graze, they can still see danger coming from almost all the way around them.

- Goats are very social and can become depressed if they are separated from their companions.

- Goats are inquisitive and use their lips to investigate the world around them. They will nibble on just about anything but are actually very picky when it comes to eating.

- Goats are ruminants, meaning they have a four chambered stomach. After eating, goats will regurgitate their meal from the first chamber to chew it a second time. This allows them to get a lot of nutrients out of low-quality food.


Goats are clever, inquisitive, sweet, and endlessly entertaining. Their natural curiosity and intelligence can sometimes make them challenging to keep as pets, but a little extra knowledge (and proper fencing!) will help you and your goats live harmoniously together. Click here for more information about how to keep your goats happy and healthy.


Find fun animal-themed activities, as well as educational and compassionate lesson plans for kids and teachers on our kids page!